Story of Joseph ~ from slave to governor of Egypt 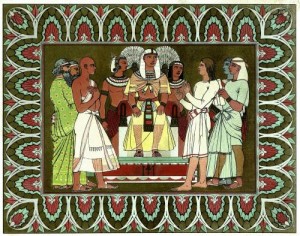 This is the story about a young man named Joseph.  His father’s name is Jacob, and they lived in Canaan.  Joseph was seventeen years old. He had ten older brothers and eventually had one younger brother.  Because Jacob favored Joseph, he had a special robe made for Joseph.  It was very beautiful and had every color you could imagine in it.  All of Joseph’s older brothers saw this and were very jealous.  They were so jealous they couldn’t even say a kind word to him.

One day Joseph had a dream.  He told his brothers, “Guess what?  Last night I had a strange dream. We were tying up bundles of grain out in the field when suddenly my bundle stood up, while all of yours gathered around and bowed to me.”  The brothers looked at each other in disgust, but Joseph continued.  “Then I had another dream that the sun, moon, and eleven stars bowed down to me.”

When Joseph told Jacob about his dreams, his father said, “Those are strange dreams.”  Jacob thought carefully about what Joseph had told him.

A few days later Joseph’s father asked him to check on his brothers who were working in the fields quite a distance away.  So Joseph went to find them. When the brothers saw Joseph in the distance, they wanted to kill him.  But Reuben, Joseph’s oldest brother, said, “Let’s not kill him.  Instead let’s throw him in a well out here in the field.”  Reuben said this because he was secretly planning to come back and rescue Joseph when the other brothers had left.

So when Joseph came to them, they took off his beautiful robe and they threw him in an empty well.  A little while later a group of people passed by who were traveling to Egypt.  One of the brothers spoke up, “Why don’t we sell him to these people, this way we never have to see him again, and we don’t have to kill him.”  The other brothers liked this idea, so they sold him to the people who were going to Egypt.  Unfortunately Reuben had been working and had not seen what happened.  When he returned to the well he realized Joseph was not there!  Joseph had been sold as a slave!  When Joseph arrived in Egypt, he was sold again to an important man named Potiphar, an assistant to the Pharaoh of Egypt.  Can you imagine the humiliation that Joseph suffered, as well as the physical pain?

Meanwhile, Joseph’s brothers took his beautiful robe, dipped it in animal blood and took it back to their father.  When their father Jacob saw the coat of many colors now covered in blood, he cried, “An animal has killed my son.”  Jacob cried for many days. No one could comfort him.

Now Joseph had started out as a slave, but the Lord God was with Joseph and He helped him do everything well with excellence, integrity and honesty.  Potiphar was so impressed with Joseph that he put him in charge of everything that he owned. The problem came when Potiphar’s wife lied about Joseph to her husband, so Potiphar had Joseph put into jail. The Lord was still with Joseph in jail, and the warden put Joseph in charge of all the prisoners.  The warden never worried because the Lord God was with Joseph and helped him.

After Joseph had been in jail for some time a cupbearer and baker to Pharaoh were sent to prison. One night each of them had a dream.  They told their dreams to Joseph and he told the cupbearer that he would soon be let out of jail.  “Please tell Pharaoh about me, and ask him to get me out of here,”  Joseph said.  When the cupbearer was freed he forgot about what Joseph did.  So Joseph stayed in jail two more years.  Until one day the Pharaoh had a dream, and nobody could explain it to him.  The cupbearer then remembered what Joseph had done for him, and Joseph was brought to Pharaoh.

When Pharaoh heard the interpretation of the dream, he said, “What can I do?”  Joseph replied, “God has shown you what to do.  There will be seven years before the bad years that will be very good.  So good that there will be extra food for everyone.  So you should save food during the seven years of plenty so that you will have enough to get through the bad years.”

Pharaoh believed all that Joseph told him and put him in charge of all the land of Egypt.  During the seven years of plenty, grain was stored in Egypt.  Later during the famine, people came from all countries to buy grain from Joseph, because the whole world was in need of food.  Some of those people were Joseph’s brothers.  When his brothers came, Joseph recognized them, but they did not know who he was.  It had been over 10 years since they had seen him.

The brothers all bowed to him because he was an important person just as he dreamed they would.

After a few meetings with his brothers he could not keep it in any longer and Joseph said to his brothers, “I am Joseph!  Is my father alive?”  But his brothers couldn’t answer him because they were afraid.  Then Joseph said,

“Come close to me.  I am your brother Joseph, the one you sold into Egypt! And now, do not be distressed and do not be angry with yourselves for selling me here, because it was to save lives that God sent me ahead of you. For two years now there has been famine in the land, and the next five years there will not be plowing and reaping. But God sent me ahead of you to preserve for you a remnant on earth and to save your lives by a great deliverance. So then, it was not you who sent me here, but God.”

There was much weeping as Joseph embraced his brothers. Now they had to face their father and tell him, “Joseph is alive.”

Now Jacob, his sons and their families moved to Egypt to live and to escape the famine.