This is an exciting lesson about our great universe. How big is it? BIG!!!
You may choose to read the lesson in Chinese [open in your browser to change the translation] and we will talk about these Discussion questions together in English.

The Hubble Telescope has given us far-reaching views of the universe, but the Hubble itself has its own remarkable story. When the first images from Hubble were received in 1990, NASA scientists realized there was a very small, but significant flaw in the mirror. NASA was able to correct this mistake so Hubble could send amazing images from space; but it was an extraordinary achievement that required astronauts installing five pairs of corrective mirrors (Hubble’s corrective lenses) in a spacewalk in 1993.

Important lesson learned: Check, double-check, triple-check.  It could save a tremendous amount of trouble! Happily, the flaw in Hubble’s lens was corrected and stunning images continue to be received from Hubble. “Pillars of Creation” is one of the most famous. 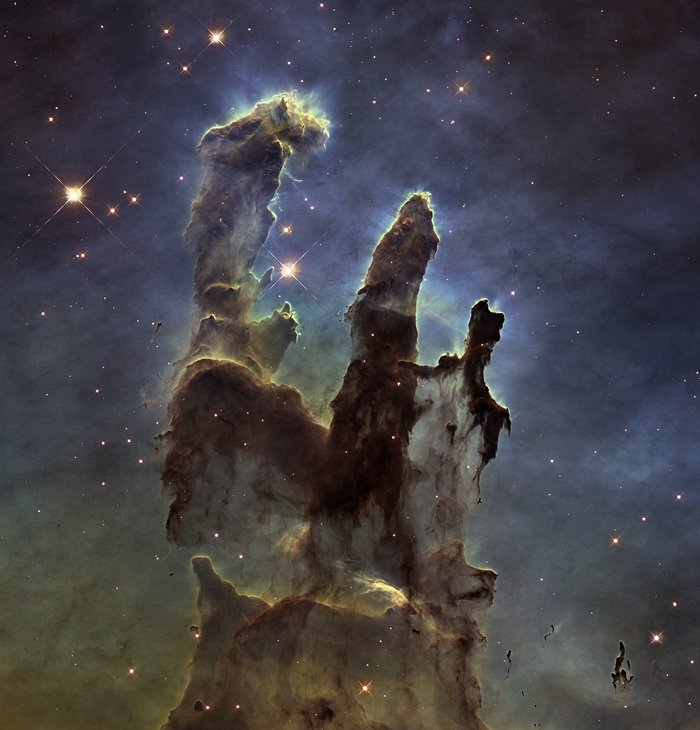 Taken on April 1, 1995, “Pillars of Creation” was named one of the top ten photographs from Hubble by space.com.

The phrase “pillars of creation” originated in a sermon given by an English Christian minister named Charles Spurgeon (1834-1892) to describe the birth of Jesus Christ.
“And now wonder, ye angels, the Infinite has become an infant; he, upon whose shoulders the universe hang​s​…he who created all things, and bears up the pillars of creation.”​

For centuries man has been trying to discover the origins of the universe, only to find that it is bigger, more complex and more amazing than we can comprehend and that the more we learn, the more there is to learn ~ infinitely more. Words fail to describe the enormity of the universe where distance is measured in light-years which are insanely fast ~ 300,000 kilometers/second ~ 9,460,800,000,000 kilometers/year.

We live on a very small planet called Earth orbiting around a pretty small star that we call the sun.  We are in an area of the universe called The Milky Way galaxy which contains approximately 200 billion stars.  Andromeda, our neighbor galaxy, is 2 million light-years away from The Milky Way (so that would be 9,460,800,000,000 x 2 million). Andromeda and The Milky Way along with about 54 other dwarf galaxies are called The Local Group!

Theories abound about how the universe started; however, many theories fail to answer the ultimate question, “What existed before there was something?  From where did the ‘something’ come?”

The first book in the Bible is called Genesis meaning “beginning.”  Genesis 1 answers the five W’s ~ who, what, when, where and why ~ about creation.