Chapter 1 ~ Lucy Looks into a Wardrobe

by Health Happiness and Heaven | The Lion, the Witch and the Wardrobe

READ CHAPTER 1
The Lion, the Witch and the Wardrobe 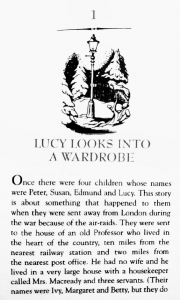 Highlight in yellow (or any color you like) words in the book that you do not understand. Look up the word and write its meaning in the margin of your book. Here are some words that are possibly new to you.

READ ALOUD TO YOUR TUTOR

Once there were four children whose names were Peter, Susan, Edmund and Lucy. This story is about something that happened to them when they were sent away from London during the war because of the air-raids. They were sent to the house of an old Professor who lived in the heart of the country, ten miles from the nearest post office. He had no wife and he lived in a very large house…

One of his hands, as I have said, held the umbrella; in the other arm he carried several brown-paper parcels. What with the parcels and the snow it looked just as if he had been doing his Christmas shopping. He was a Faun. And when he saw Lucy he gave such a start of surprise that he dropped all his parcels.
“Goodness gracious me!” exclaimed the Faun.

DISCUSS with your Tutor

What has been your greatest adventure so far in your young life?